Red Dog has leases secured in Game unit 1, 2 and 3 in Northwest Kansas. The leases we have are prime and spread out over a 70-mile span from North to South and more than 30 miles from east to west. Many of our Bucks will spend their summers in the Corn and Milo fields as it provides cover and food both. Once the fields are harvested we will begin seeing more Deer in the creek and river bottoms where all of our tree stand hunting occurs.

Hunting is done from our tree stands which have been placed by us after studying the land and scouting the local herds. There are several places where you cannot go wrong as the woods are only 50 yards wide, but while Western Kansas is barren for the most part, some of the Creek bottoms are more complicated. That's where our experience and time spent afield comes into play.

Semi-guided hunters will be shown where the stands are located and will be given trail cam pictures of the Deer that are living on that particular Farm. We will also assist in picking your setups if you wish, we recommend this simply because we’re fully immersed in this all year. We do not have any penalties or trophy fees. It’s always been my philosophy to keep hunting, hunting. No one wants to feel the pressure of a fine or even their peers judging them for the Deer they shoot. This is Hunting. If you kill a Monster, and many do, great! If you find a nice 8 point that you just can’t pass up that is great too!  We don’t “shame” or even dismiss the smaller Bucks shot here. We have always shown all harvests in order to keep our statistics transparent. I mean we could just talk about how great we are, but everyone does that. I let the photos do the talking. If you are on a semi-guided hunt and do not see a Deer that you would shoot when we do our orientation then we will simply hunt another farm. I always put my best foot forward but sometimes my definition of good Deer and yours are different. While I’ve always said that Semi Guided hunts are for Deer 130 and up, more and more hunters are taking higher scoring older Deer every year here at Red Dog. That goes for guided too.

Fully Guided hunting trips in Kansas are for the Hunter that already has several pope and young Bucks and can hold out for something  BIG. What’s Big though? I’ve always said that a 150 Buck is a Buck that no one should pass, and this is fair chase so I don’t recommend it here even if we’re hunting a larger one. That said we take more Deer over 160 every year than the year before and we’re going into season 9 now. I guess experience over the years has helped the formula. We now are sitting on more land per hunter than ever before and I expect our success rates to stay over 75% and to see more and bigger Deer just as we’ve been trending over the years. Fully guided trips are 5 days and are run by myself, Micheal Allemang or Gary Shaw. These hunts are very limited as we will only take up to two each at any time.

Red Dog isn’t built for creature comforts and it's not built to push hunters through to fund huge lodges and things that don’t really benefit the hunt whatsoever. We have nice lodging but they’re small, private places from one bedroom to four. The food is good but when you order medium rare, you might get medium, or rare. Don’t get me wrong, there’s always enough to eat and people compliment the kitchen all the time. We simply don’t put a ton of your money into lodging and food, relatively speaking. Your money is spent on Tree Stands, Trail Cameras and Land, more land than we will ever need. Just exactly what it should be, right? This is a hunting trip after all.  We are a fair chase Outfitter as well. Don’t get me wrong, I’m certainly not knocking the other places, I’m simply explaining what I offer. I don’t do smoke and mirrors, what you see is what you get. If you hold out, you’ll probably kill a really nice Deer. If you get trigger happy on a 130” 8 point, you’ll probably kill a 120-40 because those are most likely going to show before anything HUGE.

"Whitetailed deer numbers have increased dramatically in the last 20 years, and they can be found virtually statewide wherever suitable habitat exists. Highest whitetail densities are in the eastern one-third of the state. Whitetails have adapted well to Kansas’ modern landscape, finding cover in natural woodlands, shelterbelts, old homesteads and grasslands, and abundant food in cropfields. The selective management program has created a healthy deer herd, with excellent potential for trophy-sized bucks in all regions." - Kansas Department of Wildlife 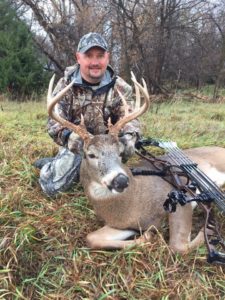 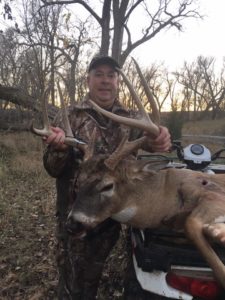 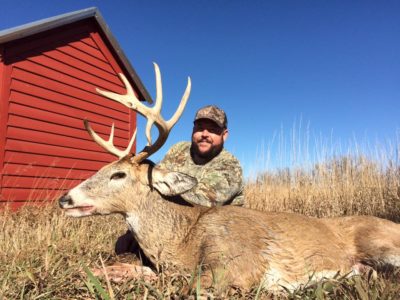 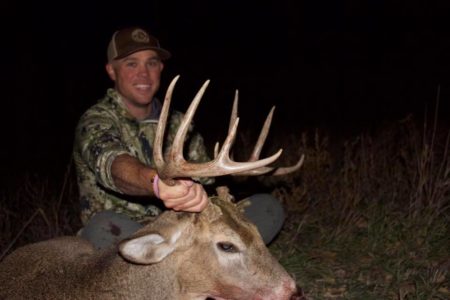 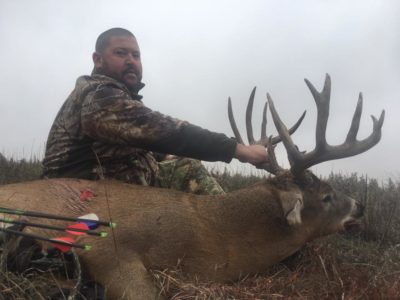 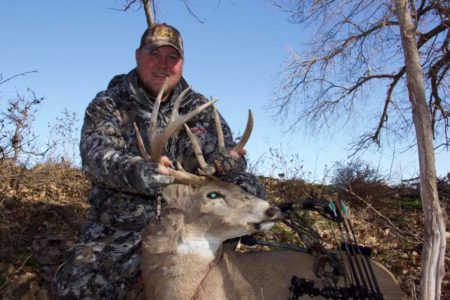 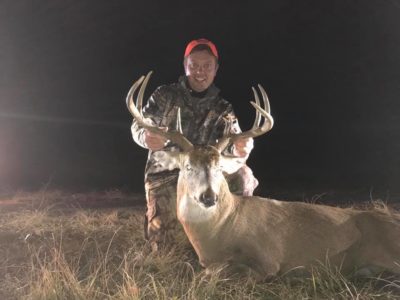